Kevin Mongelli is a multi-award winning composer as well as a voting member of The Recording Academy.  He creates and performs original piano music with unexpected insight and intensity.  Additionally, he is an aspiring screenwriter.

Kevin's mother taught him to play a 12 string guitar at an early age.  Then one day as a teenager, he was sitting at the piano and taught himself the chords from the guitar onto the keyboard.   That was a huge revelation for him.  He began to spend hours on end working with chord progressions and learning to play standards with chords and melodies.  As his skills progressed, he began to jot his own ideas down and ultimately created quite a portfolio of compositions.   He studied music at Duquesne University where he earned his college degree.  Mongelli has performed throughout the United States as well as the Caribbean. 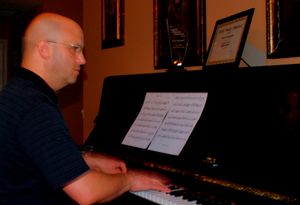 Purchase his music HERE or from any major online retailers including Amazon, iTunes.  TUNE IN on Pandora, Jango. Spotify, and iHeartRadio.

“your music is so moving, it brought tears to my eyes!" (Kingstown, Saint Vincent and the Grenadines)

“Your music has a soul that is profound, it's as deep and vast as an ocean. Thank you for bearing your soul for us!" (Colorado, United States)

“~~~ Excellent music ... contemplative and soothing! *Ascension* is masterful, for sure. Thank you so much for the listen, and I truly look forward to your future tracks." (United States)

“The piece I am listening to is The Sunrise Waltz; it is beautiful, peaceful, evocative, centering, a companion for the journey. Thank you!” (United States)